A wide range of pre-existing psychiatric and behavioral conditions and the use of psychoactive drugs could be important risk factors leading to long-term use of opioid pain medications, reports a study in Journal Pain, the official publication of the International Association for the Study of Pain (IASP). 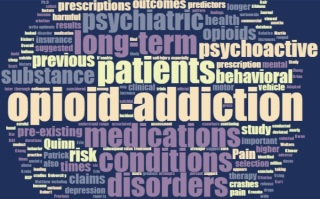 Using a nationwide insurance database, the researchers identified 10.3 million patients who filed insurance claims for opioid prescriptions between 2004 and 2013. The study looked at whether pre-existing psychiatric and behavioral conditions and use of psychoactive medications were predictors of later opioid use.

“We found that pre-existing psychiatric and behavioral conditions and psychoactive medications were associated with subsequent claims for prescription opioids,” write Patrick D. Quinn, Ph.D., of Indiana University, Bloomington, and colleagues. The association appears stronger for long-term opioid use, and especially for patients with a previous history of substance use disorders.

The results also suggest that some outcomes viewed as harmful outcomes of opioid use substance use disorders, depression, suicidal or self-injuring behavior, and motor vehicle crashes are also predictors of which patients are at risk of long-term use of prescription opioids.

Overall, the results suggested a “modest” increase in any opioid prescriptions for patients with previous psychiatric or behavioral conditions (depression or anxiety disorders, opioid or other substance use disorders, suicide attempts or other self-injury, motor vehicle crashes, and sleep disorders) or use of psychoactive medications.

About 1.7 percent of patients with opioid prescriptions become long-term opioid users (six months or longer). But the risk became substantially higher for patients with mental health conditions or psychoactive medication use. Relative increases in rates of long-term opioid use ranged from 1.5 times for patients taking medications for attention-deficit/hyperactivity disorder, to about 3 times for those with previous substance use disorders other than opioids, to nearly 9 times for those with previous opioid use disorders.

Amid the continuing opioid epidemic, it’s important to understand which patients select (or are selected for) treatment with these pain medications. Previous studies have suggested a pattern of “adverse selection”: patients at greatest risk of harmful outcomes, including those with substance abuse and other psychiatric conditions, may be more likely to be prescribed opioids in higher doses and for longer durations.

Dr. Quinn and coauthors conclude: “Our findings support the ideas that clinical practice has deviated from the ‘careful selection’ under which most clinical trials are conducted and that thorough mental health assessment and intervention should be considered in conjunction with the use of long-term opioid therapy.